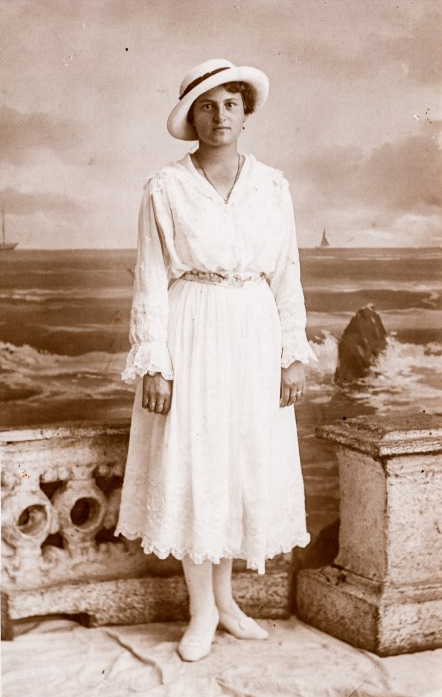 When the German troops were about to take control of Ostend, the Ostend shipping company H.P. Aspeslagh sent its sea trawlers to Milford Haven.

Five of the six boats were requisitioned  by the Royal Navy for the war effort. The sixth one, the O.126 Neptune, was not put to military use and continued to fish in the freezing waters of Iceland, despite the risk of being targeted by the German Kriegsmarine. Jacques Aspeslagh(born in 1871), helmsman of the Neptune and the nephew of the ship owner, made use of radio Ostend to broadcast a message to his wife, asking her to join him in Milford Haven. And so she did: Louise –Marie Mère(born in 1872) was among the first refugees to leave Ostend for England, taking four of her daughters with her, i.e. Alida(1896), Melanie(1902), Maria(1904) and Fernanda(1913). She also had a son Jacques, who was an infantry soldier at the front. And she had a daughter Bertha, who was already married. She fled to England too, but ended up in London. Only one year later, was she reunited with her family.

In Folkestone, Louise-Marie and her daughters had to board a train to London. One can well imagine her standing at a London platform, not speaking a word of English, with just a small note in her hand saying ‘Milford Haven’. Fortunately, a friendly constable took them to another station, where they got on the night train to Milford Haven. Then there was this rather amusing incident which took place on this journey; twelve-year-old Melanie went to the toilet and was desperately looking for a handle to flush it; on closing the toilet door, she did see a handle and pulled it…The train was brought to an immediate standstill . The engine driver and the stoker came rushing into the carriage, but nobody was able to explain to them what had really happened. They were reunited with Jacques in Milford Haven and lodged with an English family. Eighteen-year-old Alida learned to speak English quite well, as she got a lot of help from Claire, the daughter of their host family. ‘Candle’ was the first word she picked up, while showing a stump of a candle to Mr Evans at the grocery’s. Alida, since she was so fluent in English, was also the one who used to go the bank to cash pound gold coins every time they had sold their catch at the port fish market.

Having lost their ship, the Aspeslagh family moved to Swansea and Jacques Aspeslagh was employed as a helmsman by the Golder shipping company. There, they lived in a beautiful and comfortable house, with a bathroom and ‘acajou’ wooden furniture. Melanie and Maria went to school in Swansea. And Melanie was even collecting for the Salvation Army. The Aspeslagh family returned to Ostend in 1918. They took their Singer sewing machine with them. Jacques continued to work as a captain for the Golder shipping company. He received the “British War Medal 1914-1918” honouring his work in provisioning the British population during the war. He had in his possession some 60 000 pound gold coins when he arrived at Ostend. An investment officer of the National bank advised him to invest in a reconstruction fund (the Verwoeste Gewesten). However, his fortune was eroded by inflation, which was rampant at the time.