From fisherman to carpenter and back
You are here: Home

From fisherman to carpenter and back

From fisherman to carpenter and back 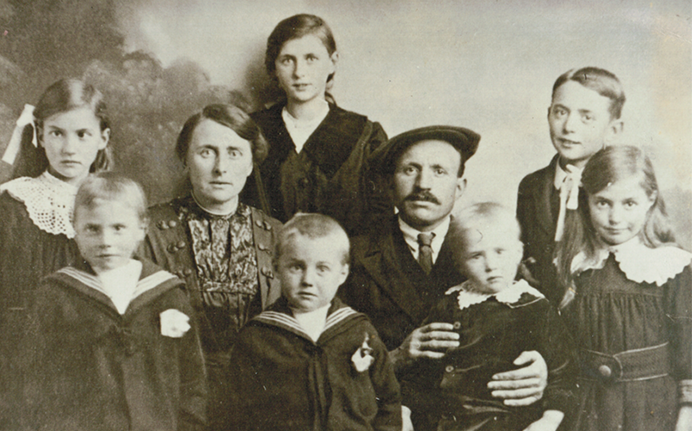 The Falleyn family fled to England, travelling in a fishing boat.

Ernest Falleyn (1877- 1927) was a fisherman from Blankenberge. At the outbreak of the First World War, he received orders from the fishing company (owned by the Blankenberge mayor D’Hondt) to take his fishing boat abroad. Hence, Ernest Falleyn left for Lowestoft, taking his pregnant wife Chlothilda Hoenraet and his six children with him. There, they left their boat behind and boarded the train to Exeter, where they stayed some time, before they took up permanent residence in Launceton (Cornwall). The Falleyn family remained there for five years. They were given housing and the children attended the local school. Chlothilda gave birth to her seventh child a few months later. Albert was named after the Belgian king.

Ernest Falleyn worked as a carpenter In Launceston. The children, especially the eldest ones, were sent on errands to the shops and mixed with local people. They managed to speak English in no time. Chlothilda, however, persisted in using her local idiom when speaking to the children, while they replied in English.

The Falleyn family was allowed to stay in England after the war. But Ernest Falleyn, feeling homesick, decided to return to Blankenberge and face the hard realities of a fisherman’s life once more. Chlothilda preferred to return to Belgium too, as she wanted to look after her mother who was seriously ill.

During World War One, the total number of Belgian refugees in Launceston was 91. Local authorities were entitled to subsidies for them, but the Launceston mayor William F. Thompson declined the offer, saying that he was proud that Launceston managed to collect enough money and mobilize sufficient resources in the community to take care of ‘their’ Belgians.

The Govaert-Falleyn family provide the data about their parents or grandparents.

Arthur Wills(Launceston, Cornwall) provided the data about the refugees in Launceston.

Thanks are due to Karen Curé.