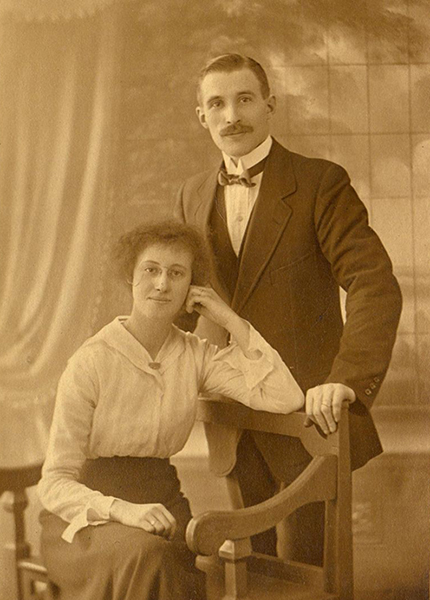 Albert came from Borgerhout (Antwerp). He volunteered for service in the first regiment of the Chasseurs à Pied in Charleroi on 8 August 1914. He was already severely wounded by the end of August, as he was assisting the local gendarmerie at Herzele (province of East Flanders). He was transported to the Ghent military hospital and taken overnight to Duinkerke, from where the first injured Belgian soldiers were brought to Cardiff. On 19 October 1914, Albert was taken to a home in Swansea, where he spent quite a long period of convalescence. Afterwards, he was declared unfit for military service. He worked in a munitions factory until the end of the war. Albert and Lilian married in Huddersfield in November 1919. She was eight years younger than him. Janet wonders how they met. Possibly, as so many women at that time, she was working in an munitions factory too, and came across Albert there. Before the war, she was a wool weaver. When she gave birth to her first child Eddy in October 1920, the couple still lived in Huddersfield, in Lockwood. However, in 1925 the family moved to Antwerp, where their second son Charles was born in October 1926. The family stayed in contact with their British relatives for quite a long time, even after Albert had died during the Second World War.

Testimony by Janet Green on Storytelling Day at the People’s History Museum in Manchester. Story of her great aunt.