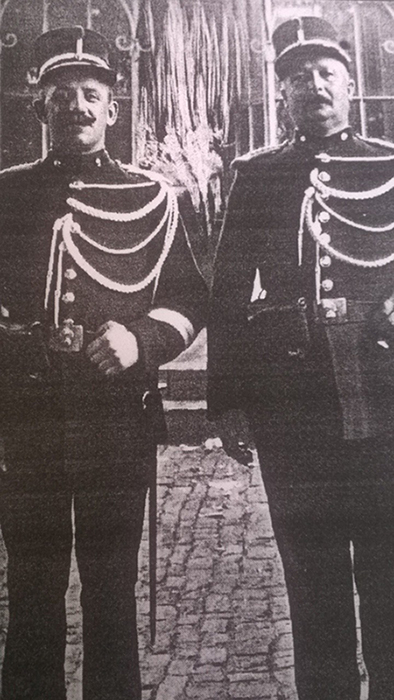 The grandmother of Michael Clapp, Mrs. Alice Graham Clapp, was involved in the reception of Belgian refugees in Exeter. One of these refugees intrigued her grandson in particular: Jacques Joseph Hamoir.

"In 2008 my elder brother, John, left me two old leather suitcases with some items belonging to our grandparents. In one was a small black covered book.

The book was found to hold the names of some five hundred Belgian refugees who fled the German occupation of their country in 1914. The first entry was dated 5th October 1914 for a Mr. N Louis Crom, his wife and their 28 yr. old daughter, whose name is unfortunately not recorded. This family kept in touch with my late aunt, Amy Clapp, until the mid 1930s. The last entry was on the 1st of February 1915, so the book only recorded the first wave of refugees who passed through Exeter. Many more must have been found homes in the months afterwards but where are the records?
The refugees came from all walks of life. The entries were mostly made in their own handwriting and not all are clear to read. In columns, they listed their names, ages, occupations, home addresses and finally, often in a very different hand the names of the people or place, village or town, the date and where they were sent for accommodation.

It appears that my grandmother, Mrs Alice Graham Clapp, kept the book and helped find them families who were prepared to house and help them. It is also recorded that in St Leonard’s Road, Exeter, where she and my grandfather lived, a Belgian Refugee Hostel had been created. I believe the hostel was in number 54 while my grandparents lived next door in number 52. Alice came from Launceston, Cornwall, and was reputed to have read to the children in a Cornish accent, as they understood her French, or attempts at Flemish, better as a result. The children nicknamed her Mooi, which I am told is Flemish for beautiful or motherly, and her own children and husband called her that for the rest of her life. She had three daughters and a much younger son, my father, who was borne in 1889.
I have tried to get help searching for any descendants of the refugees but it has proved difficult in England. At least one refugee remained in England after the war and his granddaughter has made contact. I now have a little more help both in the UK and in Belgium.

At the bottom of page 41, a retired gendarme is listed. His name appeared to me to be Jacques Joseph ‘Hornais’, aged 57 but it is far from clear. He reached Exeter on 18th January 1915. He came from a town called Herstal with a son aged 17 called Lucien. What caught my eye was the fact he was sent to a Mrs. Potts-Chatto on 13th February, 1915. She lived in a house called ‘The Daisons’ in Torquay not far from ‘Ashfield House’ where the Miller family lived. The Daisons has since been demolished and there is no longer anyone called Potts-Chatto living in the area but the street is still called The Daisons. I visited the local museum to see if I could find out more about the family. The archivist was very helpful and found a local newspaper article, reporting that on 6th January, 1915, Mrs Potts-Chatto had held a reception for people to give clothes and money for the refugees. At that event a Miss Agatha Miller, aged 24, played the piano. Agatha Miller became Agatha Christie on her marriage later that year.

Although Mr. ‘Hornais’ could not have attended that reception, as he was first recorded arriving in Exeter on 18th January, it does seem very likely that Agatha’s family knew the Potts-Chattos, as probably did my grandmother. Agatha may have met Mr. ‘Hornais’ later. He is the only gendarme recorded in the book and one of the few refugees recorded as sent to Torquay. Thus there is a strong possibility Agatha met him and he had become her inspiration for Hercules Poirot.
Little more happened in my search until a Daily Telegraph reporter in Brussels, Bruno Waterfield, became involved. He could find no one of the name ‘Hornais’ in Belgium but decided to contact the Town Council in Herstal. There he met an archivist, Madame Isabelle Le Ponce, who confirmed a retired gendarme named Jacques Joseph Hamoir had escaped to England at the outbreak of war with a son, aged 17, named Lucien, and that his wife, Marie Celine Hallet, and daughter, Ivonne, remained in Herstal. Ivonne was older than Lucien. Jacques Hamoir was borne in 1858 so he and Lucien fit the entry perfectly.

By a remarkable chance Madame Le Ponce had written a book on the gendarmes and in it was a photo of Mr. Hamoir. He is a short but bright and alert looking man. She also reported that, on the break out of war with Germany, Mr. Hamoir had retired from the Gendarmes and had joined the Army as an officer. He fought in several actions and was wounded. For his efforts he was awarded a medal for bravery. Sadly, it was thought that Lucien had drowned in Cornwall. I obtained a copy of his death certificate that shows that he was accidentally drowned while bathing on Duporth Beach near St. Austell, Cornwall, on 22nd July 1916. I am trying to find the name of the family he stayed with at 6 Ranelagh Road, Mount Charles, St Austell, and where he was buried. All this suggests they moved from Torquay to Cornwall, but when? Further research found a long article in the local newspaper recording his funeral service.
There was a huge number of both Cornish and Belgian mourners. Clearly, Lucien had been very popular and had a reputation as a musician. His mother and sister attended but when they escaped and to whom they went is not mentioned. Madame Le Ponce suggested that Jacques returned to Herstal in about 1920 and died in 1944, aged about 86. His wife died in 1938 and Ivonne married but was, sadly, childless. She too died in Herstal in 1979. On 31st October 1918, my grandmother was awarded "La Medaille de la Reine Elisabeth" by the King of Belgium.

I have it with another small one, which seems to be from the Mayor of Brussels. I have tried to contact Agatha Christie’s grandson via her solicitor’s son in the hope they may find some record that adds credibility to Mr. Hamoir being the inspiration. A Mr. John Curran who is a researcher into Agatha Christie’s works has so far found no evidence that Agatha recorded the name Hamoir but he feels the probability that Hamoir was her inspiration is plausible." 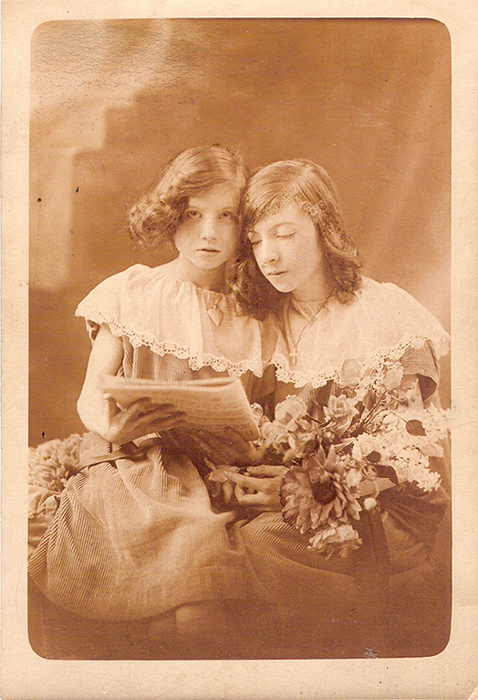 Picture from the archives of the grandmother of Michael Clapp. Who knows these girls?