When love means patience
You are here: Home 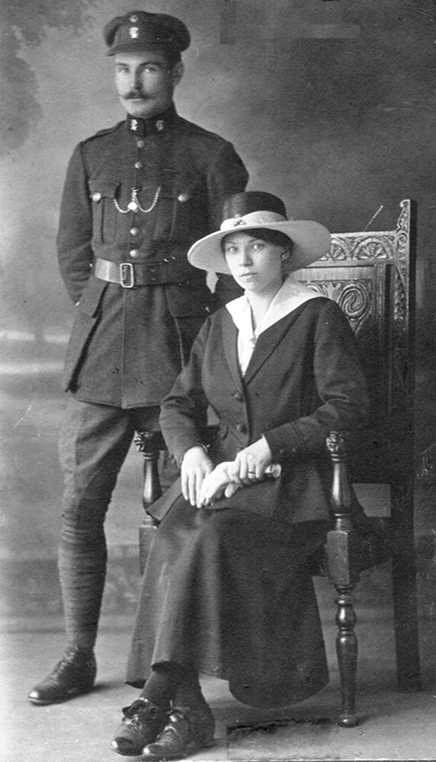 There was a long way to go before Leon could marry Maria.

Leon Dery (born in Lichtervelde in 1892) started his military career in May 1910, serving in the First Engineer Regiment in Berchem. He got engaged to Maria Deseyn from Tielt in 1914. She lived in Antwerp and was four years older than her fiancé. When the German troops were getting closer and closer, she caught the ferry at Antwerp and fled to Tilbury, a port on the river Thames(i.e. a regular cross-channel ferry service). The War Refugees Committee sent her to Blackpool, a popular seaside resort on the West coast of Northern England.

While Maria was being housed in England, Leon was fighting the Germans at Grimde and St Margriete Houtem, among other places. Eventually, he ended up at the front behind the IJzer river. At first, he was an infantry soldier. But during the long years of trench warfare he served in  the Engineer Corps again, i.e. he had to construct  ‘passerellen’(tiny footbridges in order to avoid getting your feet wet), build observation posts, dig (out) trenches, maintain fortifications, etc. The First Engineer Regiment fell victim to the first German gas attacks at Steenstrate in April 1915.

Not until 1917 were Leon and Maria thinking again about getting married. In the  meantime, Leon had been promoted to a sergeant. He was not allowed to marry without the prior permission of the military authorities, but such permission was granted by colonel Thirifay in October 1915, and ratified two weeks later by the minister of war and the Belgian government at Le Havre.

But, as  bride and bridegroom still had to celebrate their marriage in church and they did not manage to do so,  Maria wrote a letter to the Belgian Queen Elisabeth in January 1918, asking her to take steps to ensure that Leon could spend a fortnights leave in England to get married. The letter did reach colonel Thirifay a few weeks later and he responded that leave had been granted to Leon as of 7 January 1918. However, the latter had not managed to board a ship, as so many wounded soldiers had to be evacuated.

On 11 January 1918, Leon received official notification from the Belgian consul that the formalities required for a valid marriage were completed and that he would receive a legally binding marriage certificate. However, the Germans launched their spring offensive and all leave was cancelled. The Belgian troops held out at Kaaskerke and Oud-Stuyvekenskerke, while the First Engineer Regiment was busy constructing and repairing trenches, building shelters, machine gun nests, etc. The latter also took part in the final offensive that was launched on 28 September 1918. They headed for Klerken en Zarren, enabling infantry troops to make progress by clearing minefields, filling in bomb craters and building or repairing roads and bridges. The First Engineer Regiment thus took part in the attacks on Kortemark and Lichtervelde, Wingene, Lotenhulle en Hansbeke. It suffered great losses  during the attack  on Zomergem.

When the Armistice was finally signed on 11 November 1918, Leon still could not join Maria. That very month he was assigned to the Bataillon des Chemins de Fer en Campagne. He would stay with it until he was ordered to demobilize in spring 1919.

On 18 March 1919, Leon finally boarded a ship at Boulogne. He was required to report for duty on 28 March in Adinkerke. In the meantime, Maria had moved to Godalming in Southern England.  There, they made preparations for the wedding. Leon was given another ten days’ leave in May 1919. His military service was now coming to an end.

9 May 1919 was the day Leon and Maria had longed for. It was a simple ceremony and it took place in the small catholic church of Godalming. Two English ladies were willing to act as witnesses. Initially, the couple went to live in Roeselare before settling in Lichtervelde in 1921. And they lived happily ever after.